Admission
$8.00 adults
$7.00 seniors and students
Free for children under twelve and museum friends 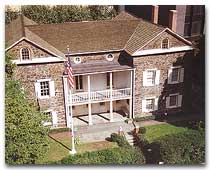 The Mount Vernon Hotel Museum & Garden transports the visitor back to the days when midtown Manhattan was a country escape for New Yorkers living in the crowded city at the southern tip of the island. New York City's only surviving day hotel, this unique museum brings this bygone era of old New York alive for children and adults alike. The Museum has a fine collection of American furniture and decorative arts, costumes, quilts and textiles, and works on paper including early American and New York City historical archives and documents.

In 1795, William Stephens Smith and his wife Abigail Adams Smith purchased 23 acres on Manhattan's Upper East Side on which they began to build a grand estate which they named "Mount Vernon" in honor of George Washington's home in Virginia. Unfortunately, the Smiths had financial difficulties, and were forced to sell the unfinished property in 1796. In 1799 William T. Robinson, a successful china trade merchant completed the main house, and the stone carriage house, which is now the site of the Museum. In 1826, when the main house burned to the ground, the carriage house was converted into an elegant day resort called the "Mount Vernon Hotel", which operated there until 1833.

Sixty years ago, the doors of 421 East 61st Street were opened to the public for the first time as the Abigail Adams Smith House, and in keeping with current fashion and scholarship of the day, it was installed as a federal period mansion. In 1983, the Abigail Adams Smith Museum was accredited by the American Association of Museums. At this time the Colonial Dames of America began to reevaluate the museum's installation, and in 1988, after years of careful research and planning, and in keeping with current scholarship and museum standards, the Board of Managers approved the new Mission Statement for the Museum, providing for its reinterpretation as the 1826-1833 Mount Vernon Hotel.

A Challenge Grant and an Implementation Grant from the National Endowment for the Humanities funded the long process of research and reinstallation of the Museum to accomplish this reinterpretation. We are now at the end of the reinstallation process, and the Museum has taken the final step by changing its name to reflect its mission. The name Abigail Adams Smith intended for the site, and the name that it, and the neighborhood, had been known by for most of the nineteenth century has been returned to it: "Mount Vernon." Effective January 6, 2000, the Board of Managers of the Colonial Dames of America voted to change the Museum's name to the "Mount Vernon Hotel Museum & Garden"

The MVHM is encouraging the surrounding neighborhood to once again call itself "Mount Vernon", as it was called, up until the beginning of the 20th century. The neighborhood bounded by 62nd street on the north, 59th street on the south, 2nd Avenue on the west and the river on the east comprises the original 23 1/2 acre estate owned by the Smiths, and is referred to as "Mount Vernon" on 19th century New York City maps, and in many 19th century newspaper articles and advertisements.

The Museum's extraordinary history of survival and adaptive reuse in an increasingly urban setting is deeply interwoven within the city's history and that of its surrounding neighborhood. The Museum offers a wide variety of educational and public programs to its audience, which consist of the general public, tourists, school groups, seniors and families. Intimate guided tours of the Museum's nine period rooms representing the circa 1830 Mount Vernon Hotel, and its ongoing small interpretive exhibits make a visit to the Mount Vernon Hotel Museum an enriching experience for each of its visitors.